Hokusai is probably the best known of all the Ukiyo-e artists. His most famous print, popularly known as The Great Wave (the title is more properly translated as In the Hollow of a Wave off the Coast of Kanagawa) is one of the images from the series Thirty-six Views of Mount Fuji. The image I have chosen to feature here is from a lesser known series of black and white woodcuts, One Hundred Views of Mount Fuji, which was published in the 1830s in three volumes. 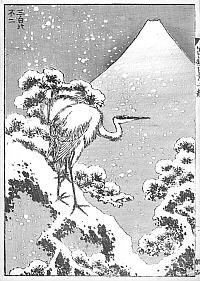 Clicking on the image will show a high definition copy (117Kb).

This image, The Three Whites is number 43 from volume II. Hokusai has used a traditional Chinese theme, but has changed the normal formula of snow, bird (usually a white heron or white falcon) and flower (plum blossom or narcissus). Here he has replaced the flower with Mount Fuji, set off against a heron on a snowy pine branch and a pattern of snowflakes falling through a grey sky.

Ukiyo-e, which translates as ‘Pictures of the Floating World’, was a movement in Japanese art that flourished in the prosperous Edo period (1600-1868). The Floating World was the world of actors and courtesans and originally most of the images portrayed their way of life. Later the movement encompassed wider interests, with birds, flowers and landscapes being particularly common.

Although painting and drawing were used by Ukiyo-e artists, the most common medium was wood block engraving. The artists provided designs for the prints, which were then cut into cherrywood blocks and printed by skilled craftsmen; up to 10,000 copies could be printed from each block before it wore out.

Katsushika Hokusai was born in Edo (now Tokyo) in 1760. In 1777 he started his apprenticeship in the studio of Katsukawa Shunsho making portraits of actors. By the late 1780s he was trying his hand at other subjects under one of his many own names. During the years from 1798 to 1806, Hokusai was emerging as one of the most dominant personalities of the Ukiyo-e school and in the early part of the 19th century he started to develop and become known for his landscapes. He was at the height of his powers in the 1820s and 1830s, when he was already an old man. Hokusai died in 1849. On his deathbed he sighed and said, "If only I could have another ten years – just another five years – then I could become a real artist".