As well as being the Crown Jewellers, Garrard make a number of one-off objects in silver for the corporate market. For their stand at the Dubai Air Show they had commissioned leading silversmith Peter Wilson to make a one metre long model of the EuroFighter and wanted a different way of displaying such a dynamic object.

Roy Reed designed a stand concept that combined rear projected video with the EuroFighter model mounted in front of the screen as if it was the lead aircraft in a squadron of computer generated aircraft. The mount was animated and its movements were synchronised to the video programme which had original music by award winning composer, Robert Hartshorne (ECG). 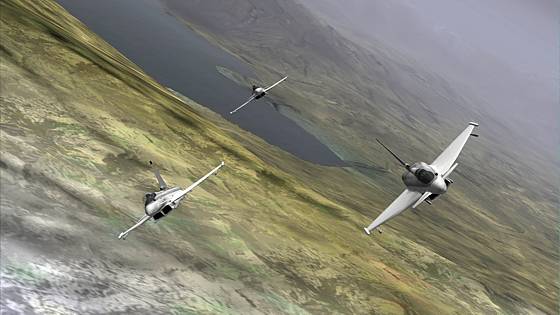 The computer modelling was by Ian Bickerstaff of the British Aerospace Flight Simulation Department. The video production was by Johnson Reed Associates and the stand construction and audio visual systems were by Integrated Circles.