Hiroshige was born in Edo (Tokyo) in 1797. His father occupied the position of fireman of their local district. At the age of thirteen after both his parents had died he inherited his father's position and also the responsibility of caring for his family. 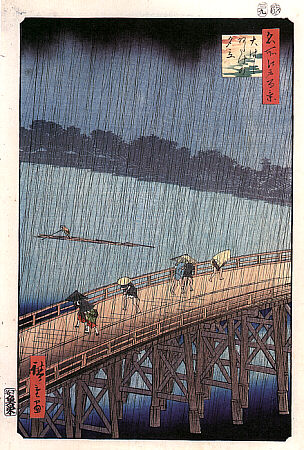 The security of the income from this job might have encouraged him to embark on the precarious career of a print designer and may also explain why his career was so slow in getting off the ground.

His early works depicting kabuki actors, beautiful women and heroes of the past was poor and they are now seen as little more than curiosities. His latent talent was however recognised by a publisher and from around 1830 he began making prints of bird, flowers and views of Edo.

The decisive breakthrough in his career came with the publication of the series The Fifty-three Stations of the Tokaido Road. Tradition has it that the drawings for this series were made on the journey from Edo to Kyoto while accompanying the white horse that was presented each year to the emperor by the shogun.

The pinnacle of his career came in 1856-8 with the publication of the series One Hundred Famous Views of Edo. These views were among the first images to come out of Japan at the end of the Edo period and were to have a profound influence on Western art of the late nineteenth century. The image shown here was copied in 1887 by Vincent Van Gogh.